Difference between revisions of "Electrical Power"

How do the various formulae for electrical power fit together? What is the difference between DC, AC and complex power and how do they harmonise with our physical conceptions of energy and power.

By formal definition, any form of power (e.g. electrical, mechanical, thermal, etc) is the rate at which energy or work is performed. The standard unit of power is the watt (or joules per second). Electrical power is the rate at which electrical energy is delivered to a load (via an electrical circuit) and converted into another form of energy (e.g. heat, light, sound, chemical, kinetic, etc). In terms of electrical quantities current and voltage, power can be calculated by the following standard formula:

Where P is power in watts, V is potential difference in volts and I is current in amperes. But how did this relationship come about?

19th century English physicist James Prescott Joule observed that the amount of heat energy (H) dissipated by a constant (DC) electrical current (I), through a material of resistance R, in time t, had the following proportional relationship:

As power is the rate of change of energy over time, Joule’s observation above can be restated in terms of electrical power:

The SI unit for energy is the joule. For electrical energy, one joule is defined as the work required to move an electric charge of one coloumb through a potential difference of one volt. In other words:

Where E is electrical energy (in joules), Q is charge (in coulombs) and V is potential difference (in volts). Given that electric current is defined as the amount of charge flowing per unit time (I = Q/t), then

As power is the rate of change of energy over time, this reduces to:

Which is the familiar equation for electrical power.

In its unaltered form, the power equation P = VI is only applicable to direct current (DC) waveforms. In alternating current (AC) waveforms, the instantaneous value of the waveform is always changing with time, so AC power is slightly different conceptually to DC power.

AC waveforms in power systems are typically sinusoidal with the following general form, e.g. for a voltage waveform:

Where V is the amplitude of the voltage waveform (volts)

is the phase displacement

If the current waveform i(t) had a similar form, then it can be clearly seen that the instantaneous power p(t)= v(t)i(t) also varies with time.

. Therefore we can write voltage and current as:

The instantaneous power is therefore:

We can simplify this equation further by defining the following terms:

We then get the final AC instantaneous power equation:

Note that the term cosθ is called the power factor and refers to the proportion of active or real component of AC power being delivered. The active power is the component of power that can do real work (e.g. be converted to useful forms of energy like mechanical, heat or light).

From the basic power equation:

We can see that power flow is a sinusoidal waveform with twice the frequency of voltage and current. 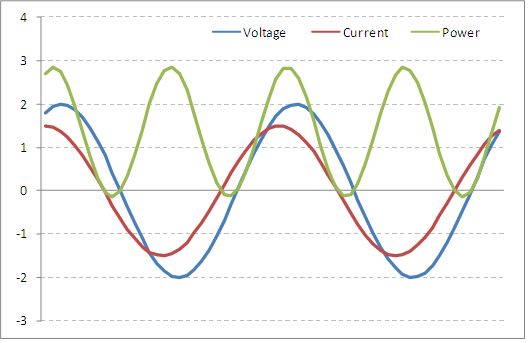 From the power equation, we can also break p(t) down into two components: 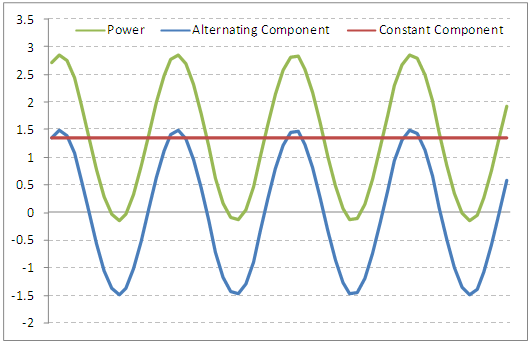 Power factor is defined as the cosine of the power angle

By definition, power is the rate at which work is being done (or the rate at which energy is being expended). As AC power varies with time, the amount of energy delivered by a given power flow in time T is found by integrating the AC power function over the specified time:

and an alternating component

. The integration can therefore be broken up as follows:

Suppose we were to integrate over a single period of an AC power waveform (e.g.

). The alternating component drops out and the integration is solved as follows:

From this we can see that work is done by the active power component only and the alternating component does zero net work, i.e. the positive and negative components cancel each other out.

Books often mention AC power in terms of complex quantities, mainly because it has attractive properties for analysis (i.e. use of vector algebra). But often, complex power is simply defined without being derived. So how do complex numbers follow from the previous definitions of power?

For more information on how complex numbers are used in electrical engineering, see the related article on complex electrical quantities. Much of the derivation below is reproduced from this article.

Back in 1897, Charles Proteus Steinmetz first suggested representing AC waveforms as complex quantities in his book "Theory and Calculation of Alternating Current Phenomena". What follows is a sketch of Steinmetz’s derivation, but specifically using AC power as the quantity under consideration.

Previously, we found that AC power is a sinusoidal waveform with the general form (for lagging power factors):

For a fixed angular frequency ω, this waveform can be fully characterized by two parameters: the rms voltage and current product VI and the lagging phase angle

Using these two parameters, we can represent the AC waveform p(t) as a two-dimensional vector S which can be expressed in polar coordinates with magnitude VI and polar angle

This vector S can be converted into a pair of rectangular coordinates (x, y) such that:

It can be shown trigonometrically that the addition and subtraction of AC power vectors follow the general rules of vector arithmetic, i.e. the rectangular components of two or more sinusoids can be added and subtracted (but not multiplied or divided!).

Note that the addition sign does not denote a simple addition because x and y are orthogonal quantities in a two-dimensional space. At the moment, j is a meaningless operator to distinguish the vertical component of V. Now consider a rotation of the vector by 90°: 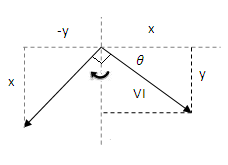 Suppose we were to define the operator j to represent a 90° rotation so that multiplying a vector V by j rotates the vector by 90°. Therefore:

Therefore using our definition of j as a 90° rotation operator, j actually turns out to be an imaginary number and the vector S=x+jy is a complex quantity. Therefore our vector S:

Is referred to as complex power or sometimes apparent power (refer to the section below). It is most commonly written in this form:

are the active (or real) and reactive power quantities defined earlier.

Given voltage and current phasors V and I such that:

Then the complex power S can be calculated as follows:

is the power angle (i.e phase difference between voltage and current)

Using Euler’s formula, we can represent our complex power vector as a complex exponential using the original polar parameters:

The use of complex exponentials gives us an alternative way to think about complex power. We have seen that the vector S rotates around the origin when we vary the phase angle

is actually a rotation operator used to rotate vectors around a circle in a two-dimensional space (there's a good explanation of this at Better Explained. Therefore

is a vector with magnitude VI rotated clockwise by angle

In other words, complex power is a two-dimensional vector representation of AC power, which is more amenable for manipulation than the time-domain function of AC power p(t).

In the previous section, we saw that complex power S is also sometimes called apparent power. However in practice, apparent power is often used to refer to the magnitude of S, which is

So far, we have only been talking about DC and single-phase AC power. The power transferred in a balanced three-phase system is equal to the sum of the powers in each phase, i.e.

is the three-phase active power (W)

is the phase-neutral voltage (Vac)

is the phase current (A)

is the power factor (pu)

For a star (wye) connected load:

For a delta connected load:

are the line-to-line voltage and line current respectively.

Therefore, three-phase active power is the same for both star and delta connected loads (in terms of line quantities):

Similarly, three-phase reactive power and apparent power are as follows: