Low frequency induction (LFI) in metal pipelines is a form of electromagnetic interference that occurs when high voltage transmission lines are run in parallel with metallic pipelines.

During an earth fault condition, the phases of the transmission line are no longer balanced and as a result, a more significant voltage is induced on the pipeline. This condition is usually called "Fault LFI".

LFI calculations are typically done for personnel safety reasons, in order to ensure that induced voltages are not hazardous to someone in contact with the pipeline.

In cases where such a situation is not possible, then an approach minimising the risk of electric shock could be followed. This could involve restricting access to the pipeline or using a probability-based methodology to estimate the risk of exposure, etc.

Before beginning the calculation, the following data needs to be gathered:

Step 2: Define the Zone of Influence

For example, long section lengths can be applied when the pipeline and transmission line are roughly parallel. However, where the two lines converge, diverge or cross, smaller sectional lengths should be used (typically, a maximum ratio of 3:1 between the start of section and end of section separations is used to determine sectional length).

A table showing the sectional lengths and horizontal distances can then be developed, for example:

Therefore, we'd like to further refine these distances. Ideally, we want a single effective distance between the pipeline and each phase (and if applicable, the earth wire). By using an effective distance, this makes it more convenient for us to calculate the induced voltages on a pipeline section.

This effective distance should incorporate the following: 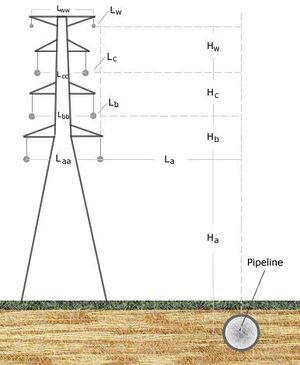 The figure to the right, showing a double conductor tower with two earth wires, gives an example of the kind of data that is required:

Of course your data requirements may vary depending on the transmission line type, but you need enough data to fully describe the spatial relationships between the phase conductors and the pipeline geometrically.

is the effective horizontal distance between phase a and the pipeline

is the effective horizontal distance calculated above (m)

Note that the above show only horizontal distances. We can use simple Pythagoras to calculate the overall effective distance between phase a and the pipeline, taking into account the vertical arrangement of the conductors (relative to the pipeline). Below, we do this for a tower line:

is the height from the pipeline to phase a (m)

The same process above is repeated to calculate the effective distances for the other phases and the earth wire (if applicable).

The effective distances can be calculated also for other spatial conductor arrangements, using the geometric mean as a basis. Ultimately for each line section, we'd like to end up with only a single effective distance between the pipeline and a phase of the tower line.

To assess the safety of a joint right-of-way installation, we want to calculate pipeline-to-earth touch voltages. However a buried pipeline cannot be treated like another overhead conductor in air because a pipeline has a finite impedance to earth that is distributed along its entire length.

In order to calculate a more accurate pipeline-to-earth touch voltage, we need to consider the electrical characteristics of the pipeline.

The pipeline impedances described in this section are simplified approximations of Sunde's method [5] and are based on Appendix G of CIGRE Guide 95 "Guide on the Influence of High Voltage AC Power Systems on Metallic Pipelines" [2]. Refer to Sunde's original work [5] for more details on accurately modelling pipeline and other buried conductor impedances.

For a buried and coated metallic pipeline, the longitudinal impedance per metre can be approximated as follows:

is the pipeline longitudinal (or series) impedance (

is the diamter of the pipeline (m)

is the resistivity of the pipeline metal (

is the resistivity of the soil (

is the permeability of free space (H/m)

is the relative permeability of the pipeline metal (H/m)

is the nominal frequency of the transmission line (Hz)

For a buried and coated metallic pipeline, the shut admittance per metre can be approximated as follows:

is the pipeline shunt admittance (

is the diameter of the pipeline (m)

is the resistivity of the pipeline coating (

is the thickness of the pipeline coating (m)

is the relative permeability of the coating (H/m)

is the permittivity of free space (F/m)

The pipeline shunt impedance is simply the reciprocal of the admittance (remember that it is complex quantity):

is the pipeline characteristic impedance (

is the pipeline longitudinal impedance (

is the pipeline longitudinal conductance (

is the pipeline effective length (m)

is the pipeline longitudinal impedance (

is the pipeline longitudinal conductance (

The mutual coupling impedance between a line conductor and the pipeline (with earth return) can be given by the general formula below (based on Carson's equations [4]):

is the mutual impedance between the line conductor

is the equivalent distance between the line conductor

is the nominal system frequency (Hz)

is the depth of equivalent earth return given by:

is the resistivity of the soil (

Using the formula above, you can calculate the mutual impedances

, between the pipeline and phase a, b and c of the transmission line respectively. To calculate the impedances in Ohms, multiply the mutual impedances by the sectional length of the pipeline.

Load LFI results from either unbalanced load currents or spatial differences between the phase conductors relative to the pipeline. Given the load current phasors for the transmission line, the total open-circuit induced LFI voltage on the pipeline is simply the vector sum:

are the load current for phase a, b and c respectively (A). Note that these quantities are complex phasors

are the mutual coupling impedances between the pipeline and phase a, b and c respectively for a section of the pipeline (

Induced voltages on pipelines represent are electric shock hazards. Because load LFI can be regarded as a continuous hazard (i.e. the hazard is always present), then the allowable pipeline-to-earth touch voltage limits are lower than in the fault LFI case. Limits are typically in the range of 32V to 64V (see the section on international standards below for more guidance on allowable limits).

Note that the open-circuit LFI voltage calculated earlier is higher than the pipeline-to-earth touch voltage as it doesn't take into account any voltage leakages to earth along the pipeline. Therefore, if the load LFI voltage you have calculated is lower than the allowable limits, then no further analysis is necessary.

During a balanced three-phase fault, the fault current will still be balanced across all three phases (i.e. vector sum of the faulted phase currents is close to zero). Therefore any induced voltage in the pipeline will be due primarily to the spatial assymetry of the transmission line relative to the pipeline, and this will generally be small.

The general formula for fault LFI is as follows:

is the earth fault current, expressed as a complex phasor (A)

The shielding factor is the shielding effect caused by earth wires, counterpoise earths and perhaps other metallic structures, which serves to lower the LFI voltage induced on the pipeline. There a number of mechanisms that bring about this shielding effect, for example:

For an overhead earth wire, the shielding factor can be calculated as follows:

is the self impedance of the earth wire (

Calculating the mutual coupling impedances between the pipeline and the faulted line,

, depends on the phase of the faulted line and it's spatial orientation relative to the pipeline. You could calculate the mutual coupling impedance between the closest phase and the pipeline, which would represent the worst case scenario.

Alternatively, you could calculate the mutual coupling impedance for a group of conductors (e.g. all three phases) by considering the geometric mean separation distance between the pipeline and the group of conductors. This will result in an induced LFI voltage that is an average of the conductor group.

Similarly for groups of earth wires (e.g. two overhead earth wires), a geometric mean can be selected to represent the group rather than selecting a single wire, or modelling interactions between the wires, faulted line and the pipeline (which becomes increasingly complicated).

A common approach is to model the pipeline as a lossy transmission line, with the following equivalent circuit for each pipeline section: 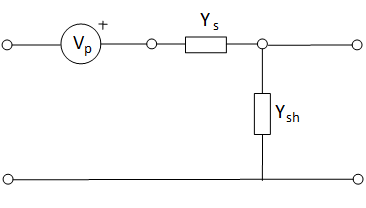 is the induced LFI voltage on the pipeline section (Vac)

is the longitudinal series admittance of the pipeline section (

is the shunt admittance of the pipeline section (

For a pipeline with "n" linear sections, the overall equivalent circuit model is therefore:

is the admittance of a pipeline shunt earthing conductor (

The equivalent circuit can now be readily analysed using Kirchhoff's laws and converted into a system of linear equations. The unknown pipeline-to-earth node voltages can then be solved using matrix operations. Depending on the number of line sections, you will probably need to use a computer program to solve this linear algebra problem.

If the pipeline-to-earth touch voltages are still above the allowable limits, then the design of the right-of-way needs to be modified or mitigation works installed. Design modifications and mitigation works can include:

Most countries have their own standards for electromagnetic interference on pipelines.

The LFI calculation is greatly simplified by using a computer software package, especially for more complicated joint rights-of-way. The following commercial software packages are among the most popular:

A free alternative for single pipeline and tower line rights-of-way:

The LFI calculation is typically done to confirm the pipeline and / or transmission line design and to determine if mitigation is required. If mitigation measures are required, then the next step would be to design and specify these mitigation works.