From Open Electrical
Revision as of 13:59, 18 November 2020 by Jules (talk | contribs) (Created page with "== Introduction == The objective of the '''power flow''' (or '''load flow''') calculation is to determine the steady-state operating conditions of an electrical network. The...")
(diff) ← Older revision | Latest revision (diff) | Newer revision → (diff)
Jump to navigation Jump to search

In the simplest case of AC power transmission between two buses connected by a line (as shown in Figure 1), the complex AC power flow at the receiving end bus can be calculated as follows:

Similarly, the power flow at the sending end bus is:

In power flow calculations, it is generally more convenient to represent impedances as admittances, i.e.

so that the current phasors are calculated by multiplication rather than complex division:

The equations for the two bus system above form the basis of the power flow calculations. In this article, these equations are extended to larger systems of arbitrary size and topology. 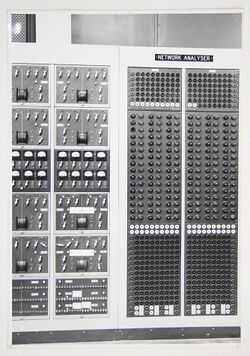 Power flow calculations evolved from the planning departments of electricity utilities in the early 20th century, where they were (and still are) used to simulate the effects of network augmentations, different load scenarios, network configurations, etc. Early power flows were solved by AC network analyzers (or calculating boards), which were analog computers containing resistors, inductors and capacitors calibrated to be a miniature scale equivalent of the actual electrical network. For large systems, these network analysers took up the space of entire rooms. As they were physical in nature, the network analysers needed to be re-wired for each different configuration, augmentation or scenario to be studied.

Starting with the seminal paper by Ward and Hale in 1956 [1], the use of digital computers would enable power flow calculations to be performed faster and in a more flexible manner. The iterative method proposed by Ward and Hale (which became known as the Gauss-Seidel method) was straightforward to implement, but exhibited poor convergence characteristics.

In 1961, Van Ness and Griffin [2] introduced Newton's method for solving power flows (which later became known as the Newton-Raphson method), which had more favourable characteristics but was limited to smaller networks due to computer memory requirements. In their 1967 paper, Tinney and Hart [3] exploited the sparsity properties of the Ybus matrix (and by extension, the Jacobian matrix) and in conjunction with numerical techniques such as triangular factorisation and optimal ordering, were able to make the Newton-Raphson algorithm practical for solving large networks using the computing resources available at the time.

In 1974, Stott and Alsac [4] recognised that in many practical networks there was decoupling between 1) active power and voltage and 2) reactive power and phase angle. The proposed an algorithm (the fast decoupled load flow) that significantly reduced the computational requirements to construct the Jacobian matrix and therefore led to large gains in computational speed (although at the expense of a little accuracy).

To simplify the calculation of admittances / impedances across different voltage levels, it is convenient to use a per-unit representation of the network. By default, most power flow programs use a system-wide MVA base of 100MVA.

In the basic power flow formulation, three-phase systems are represented in single-phase form, based on the assumption that the system is perfectly balanced (e.g. loads and generation are balanced, transmission lines are fully transposed, etc). This assumption holds relatively well for high voltage transmission systems, but begins to break down at smaller scales (e.g. low voltage distribution level), where a full three-phase power flow formulation is necessary.

The electrical network needs to be represented in such a way so that the quantities of interest (e.g. voltage, power flows, etc) can be solved using either nodal analysis or mesh analysis approaches. The nodal method is the standard approach for power flow calculations for several reasons: 1) busbars in the system can be easily translated into nodes, 2) the admittance matrix (without mutual couplings) can be built from inspection, and 3) the nodal method can exploit the sparsity of the admittance matrix.

For example, consider the simple system below consisting of three buses (numbered 1, 2 and 3), two generators (G1 and G2), a load (L2) and a shunt capacitor (C2) connected via transmission lines: 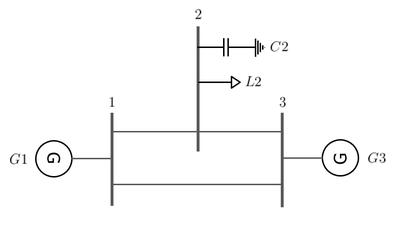 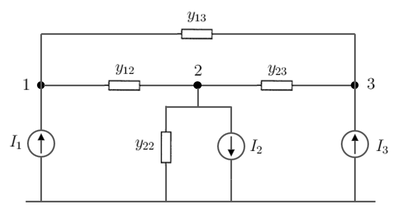 Note that the line at the bottom represents the reference node, usually taken to be an earth reference. All node voltages are expressed with respect to this reference node.

From Kirchhoff's current law, we can see that the injected currents must equal the sum of the branch currents leaving the node. For example, at node 1:

indicating that it is a load and current is leaving the bus as opposed to being injected. Note also the effect of the shunt capacitor, which appears as a self-admittance (

The general formulation for the current injection at node k of an n-node system is:

Or in compact form:

is the vector of bus voltage phasors

is the bus admittance matrix (more on this below)

The bus admittance (or Ybus) matrix is one of the fundamental building blocks of power system simulations, describing both the topology and admittances / impedances of an electrical network. The diagonal elements of the Ybus matrix are referred to as self-admittances and the off-diagonal elements are mutual admittances.

1. Self-admittances (diagonal elements): at bus k are the sum of all branch admittances connected to the bus (including shunt admittances to earth):

The Ybus matrix is our three bus example above is:

The Ybus matrix is a square and symmetric

matrix with complex values. Normally, it is also very sparse since most practical networks are not densely interconnected and thus have few non-zero branch admittance values.

Note that the Ybus matrix is non-singular only if there are shunt admittances connected (e.g. the shunt capacitor

in our three-bus example above). This is easily proved by noticing that without shunt admittances, each row and column of the Ybus matrix sums to zero (i.e. it is a zero-sum matrix) and therefore does not have full rank and is not invertible.

on each bus and the Ybus matrix

, the bus power injections (i.e. net active and reactive power flows for the kth bus) can be calculated in rectangular coordinates as follows:

are the elements of the Ybus matrix

It was noted earlier that at each bus, four variables (

) are required to be known to fully define the power flows in the system. To solve the power flow problem, two of the four variables need to be specified (i.e. known) a priori for each bus and the power flow calculation solves for the other two. Typically, power injections at the buses are known (e.g. measured or estimated loads or dispatched generation at the bus) and are therefore normally specified. As a result, the bus voltages and angles are generally the unknown variables to be solved.

Therefore in the classical formulation, the power flow problem is constructed as a set of non-linear algebraic power equations for the unknown variables in the system (bus voltage magnitudes and angles). The aim of the power flow calculation is to arrive at values for bus voltages and angles such that the the mismatch error between the specified and calculated power injections at each bus are within a pre-specified error tolerance.

As discussed earlier, two variables of the four bus variables need to be specified at each bus. The two specified variables do not have to be the same for every bus, which leads to the definition of the following common bus types:

(1) Swing (or slack) bus [SW]: since network losses are not known a priori, a swing bus is required where the voltage is specified, but the active power injected into the bus is unknown. The swing bus is usually designated as the voltage reference for the system. In practice, the swing bus would be analogous to a large generator responsible for load-frequency control or the point of common coupling to a larger external grid. Specified variables:

(3) Constant power bus [PQ]: in the PQ bus, the active and reactive power injected into (or consumed at) the bus is specified. PQ buses are typically used to represent constant power loads (e.g. residential, industrial, etc), where it is assumed that the active and reactive power injections are not affected by small variations in bus voltages (at steady state). Specified variables:

is the specified complex power injection at bus k

is the calculated complex power injection at bus k (i.e. from Equation 2)

The power mismatches can also be expressed in rectangular form where the calculated active and reactive power injections are computed using Equations 3 and 4 respectively, i.e.

2. Select a swing bus for the network

3. For all other buses, define the bus type (e.g. PQ or PV) and specify the known variables

4. Select initial voltages and angles for all buses. Commonly, a flat start is used where all voltages are initialised at

5. Calculate the power mismatch vector by using the initial voltages in Step 4 and the specified power injections in Step 3.

6. Apply an iteration method (e.g. Newton-Raphson, Gauss-Seidel, etc) to get next iteration of bus voltages

The formulation of the power flow problem is generic, but there are a number of options for the iteration method used to solve the non-linear equations. The most common methods are as follows: