Transformer (magnetising) inrush currents are caused by sudden step-changes in the transformer magnetising voltage and can be divided into three general types:

Transformer energisation is considered to cause the highest inrush currents and will be the focus of this article. When energised, an initial magnetising inrush current flows into the transformer. Typically, the inrush current lasts in the order of 0.1s and has the following magnitude:

Transformer inrush currents are predominantly due to saturation of the transformer core and can be modelled as an RL switching transient with a saturable inductance L.

Consider the application of a sinusoidal voltage to a transformer that is modelled very simply as a coil of N turns. By Faraday's law, we get:

is the voltage amplitude (V)

is an arbitrary switching angle (radians)

is the number of turns in the transformer coil

is the transformer magnetising flux

, we take the Laplace transform of it:

Taking the inverse Laplace transform, we finally get:

While this is a gross simplification of reality, the equation above can give us some intuition about the nature of the transformer flux during a transient switching on (energisation) event. 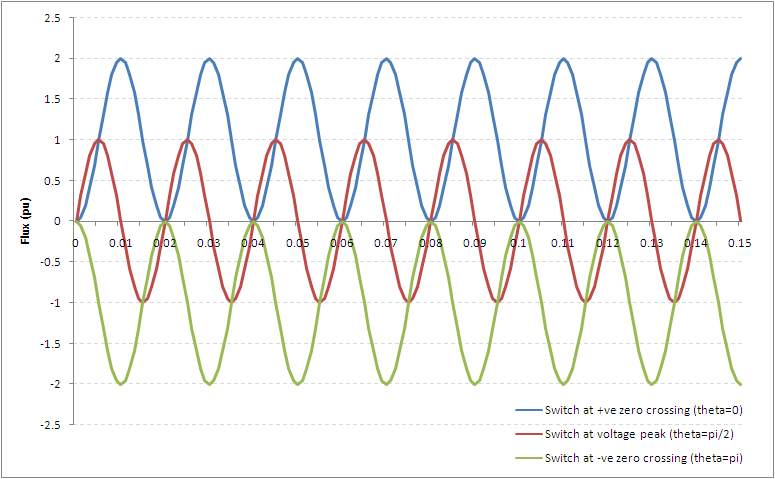 Figure 2. The effects of switching angle on flux

On the other hand, the residual flux can reinforce the dc offset caused by the switching angle and can result in peak flux values (absolute) well over 2pu.

In our idealised model above, the transient flux waveform on switching has constant dc offsets depending on the switching angle and residual flux. However in a practical transformer, the effect of leakage impedances (i.e. winding resistances and leakage reactances) will lead to an exponentially decaying dc offset component (like in the switching of RL circuits), with the rate of decay depending on the time constant 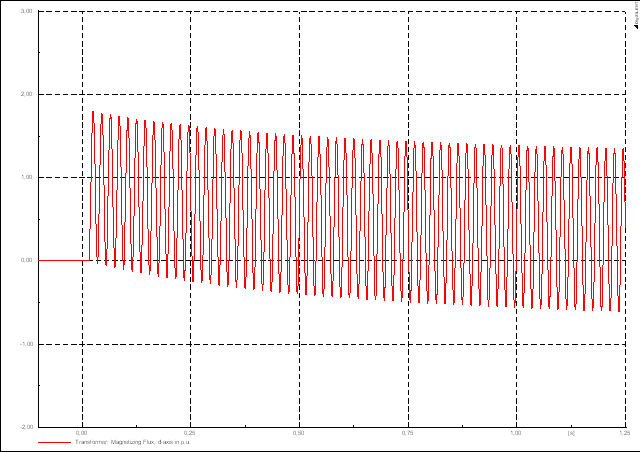 Non-Linear Relationship between Flux and Current 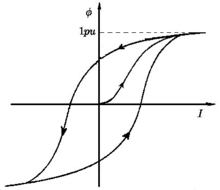 We saw above that during transient conditions, the magnetising flux can rise up over 2pu (depending on the switching angle and residual flux). The other key factor that leads to high inrush currents is the non-linear relationship between flux and current.

The transformer core exhibits saturation characteristics like the hysteresis loop in the figure shown on the right. Here it can be seen that at 1 pu flux, the core is already saturating and the slope of the curve begins to approache a horizontal line. Therefore, if the flux is increased further above 1 pu flux, the current drawn can be several orders of magnitude higher.

Putting all the pieces together, the general intuition explaining transformer energisation inrush can be put as follows:

1) On the sudden application of a voltage to the transformer (i.e. circuit breaker is closed), a transient flux waveform is generated that, depending on the switching angle and residual flux, can reach a peak of over two times nominal flux.

2) The relationship between flux and current is highly non-linear. At higher than nominal flux, the core will begin to saturate and the related magnetising currents can get very high. This is equivalent to saying that as the core saturates, the magnetising reactance decreases significantly.