A typical AC waveform can be represented in the time-domain as a sinusoid of the following general form:

A is the amplitude of the waveform

is an arbitrary phase angle (radians)

For a fixed angular frequency

, this waveform can be fully characterized by two parameters: the amplitude A and the phase angle

. Note that the phase angle is negative to represent a time delay.

Using these two parameters, we can represent the AC waveform as a two-dimensional vector Z which can be expressed as a polar coordinate with magnitude A and polar angle

This vector Z can be converted into a pair of rectangular coordinates (x, y) such that:

It can be shown trigonometrically that the addition and subtraction of these vectors follow the general rules of vector arithmetic, i.e. the rectangular components of two or more sinusoids can be added and subtracted (but not multiplied or divided!).

Note that the addition sign does not denote a simple addition because x and y are orthogonal quantities in a two-dimensional space.

At the moment, j is a meaningless operator to distinguish the vertical component of V. Now consider a rotation of the vector by 90°: 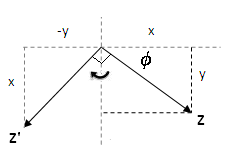 Suppose we were to define the operator j to represent a 90° rotation so that multiplying a vector Z by j rotates the vector by 90°. Therefore:

Therefore using our definition of j as a 90° rotation operator, j is actually an imaginary number and the vector Z=x+jy is a complex quantity. Therefore our vector Z

Using Euler’s law, we can represent our complex power vector as a complex exponential using the original polar parameters:

The use of complex exponentials gives us an alternative way to think about complex electrical quantities. We have seen that the vector Z rotates around the origin when we vary the phase angle

is actually a rotation operator used to rotate vectors around a circle in a two-dimensional space (there's a good explanation of this at Better Explained.

is a vector with magnitude A rotated clockwise by angle

Steady-state sinusoidal voltage and current waveforms can be expressed as complex vectors as follows:

are the complex voltage and current vectors respectively

are the voltage and current magnitudes

are the voltage and current phase angles

Complex power can be derived from complex voltage and current as follows:

is the phase difference between voltage and current.

is the active power

is the reactive power

Complex impedance is derived from complex voltage and current through Ohm's law:

The resulting vector is usually expressed in cartesian form: