This article describes the steady-state or frequency domain distributed parameter line model. By steady-state, we mean that the voltage and current along the line are steady and do not change with time. 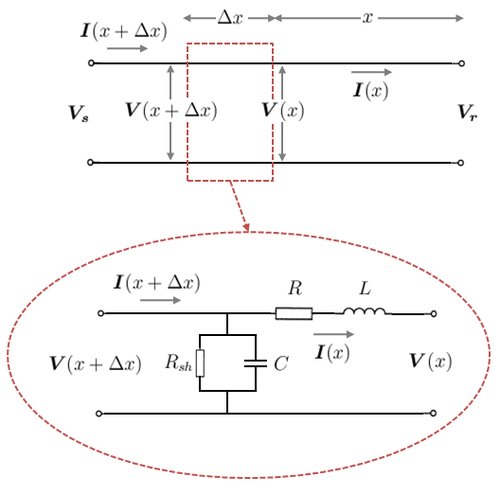 In a real transmission line, the R, L and C circuit elements are not lumped together, but are uniformly distributed along the length of the line. In order to capture the distributed nature of the circuit parameters, consider the single-phase line model in Figure 1. In particular, consider a small line segment of length

metres, which is located at a distance

metres from the receiving end bus.

Note that the impedance and admittance are denoted in per-length values (i.e. per metre). Therefore, the series impedance of a line segment of length

. The same logic applies for the shunt admittance.

Derivation of Voltage and Current Equations

Re-arranging this equation, we get:

is by definition the derivative of

Re-arranging this equation, we get:

Taking the limit of both sides as

Differentiating Equations (1) and (2) again with respect to

We can re-substitute Equations (1) and (2) into the above to get:

The pair of equations above can be re-arranged to form homogenous second-order linear ordinary differential equations, i.e.

The general solution to this differential equation is:

is known as the propagation constant (with units

Plugging this solution back into Equ. (1), we can also solve for

is known as the characteristic impedance or surge impedance (with units

We can solve for the constants

. The solution is as follows (see the full derivation here):

Substituting these constants, we get the final distributed parameter transmission line equations:

Given the exponential forms of the hyperbolic functions

We can substitute these into the transmission line equations to get the well-known hyperbolic form of the equations:

For a line of length

metres, the ABCD parameters of the above equations can be represented in matrix form as follows:

where the sending end quantities are

And the impedance and admittance with

Equations (1) and (2) above in the single-phase model can now be re-written in the multi-conductor model as:

Differentiating these equations with respect to

The issue with the multi-conductor case is that because the matrices [Z] and [Y] are full, then their product [Z][Y] or [Y][Z] is also full. For example, if we were to expand out Equ. (11):

The first line of the system of equations above can be expanded as follows:

Unlike in the single-phase case above, there is no closed-form general solution to this second-order differential equation (because of the cross-coupling between phases). The so-called modal transformation is required to decouple the phases from equations (11) and (12).

Consider linear transforms of the voltage and current vectors denoted

, where by convention, the subscripts change from phases (abc) to modes (012), i.e. for a three-phase, three-conductor line:

Suppose that the original quantities are related to the transformed quantities as follows:

Substituting these transformed quantities into equations (7) and (8):

Supposing that the transformation matrices

are independent of x, we can re-arrange the equations above as follows:

Following the same procedure as before, i.e. differentiating the equations by x and substituting, we end up with:

to be diagonal matrices, i.e.

It is apparent from inspection that the transformation matrix

are the eigenvectors and eigenvalues of

are the eigenvectors and eigenvalues of

Furthermore, since the matrices

are both symmetric, then

. We know that the eigenvalues of a matrix and its transpose are the same, so therefore

. In multi-conductor matrix form, this can be written as a propagation matrix

Let the eigenvalues of the propagation matrix

A property of eigenvalues is that if matrix

are the eigenvalues of

are the eigenvalues of

Each of these decoupled modal differential equations above can now be solved using the general solution:

Taking the first derivative of the equations above with respect to x, we get:

Let's denote equation (21) above in the following shorthand notation:

Recall from earlier that:

Equating this with equation (22) and solving for

Using this definition, the modal current vector can be expressed as:

It can be shown that if

is also diagonal (see the derivation here). Therefore, when expanded, equation (24) looks like this:

We now have the following six modal equations that we can solve using boundary conditions:

The boundary conditions at the receiving end

must be transformed to modal quantities as follows:

At the receiving end (i.e. x = 0), the modal equations reduce as follows:

Solving for the constants of

These constants can be plugged back into the modal voltage and current equations to get the final expressions:

As in the single-phase distributed parameter model, the final modal voltages and currents shown in equations (28) and (29) can be converted to the following hyperbolic forms:

Derivations of these forms are straightforward and left to the interested reader to prove.