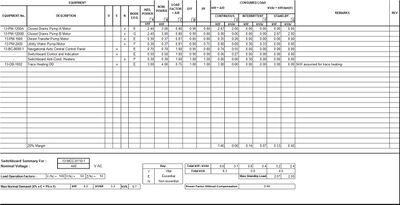 Preparing the load schedule is one of the earliest tasks that needs to be done as it is essentially a pre-requisite for some of the key electrical design activities (such as equipment sizing and power system studies).

The electrical load schedule can typically be started with a preliminary key single line diagram (or at least an idea of the main voltage levels in the system) and any preliminary details of process / building / facility loads. It is recommended that the load schedule is started as soon as practically possible.

There are no standards governing load schedules and therefore this calculation is based on generally accepted industry practice. The following methodology assumes that the load schedule is being created for the first time and is also biased towards industrial plants. The basic steps for creating a load schedule are:

The first step is to gather a list of all the electrical loads that will be supplied by the power system affected by the load schedule. There are generally two types of loads that need to be collected:

A number of electrical load parameters are necessary to construct the load schedule:

Once the loads have been identified, they need to be classified accordingly:

What voltage level and which switchboard should the load be located? Large loads may need to be on MV or HV switchboards depending on the size of the load and how many voltage levels are available. Typically, loads <150kW tend to be on the LV system (400V - 690V), loads between 150kW and 10MW tend to be on an intermediate MV system (3.3kV - 6.6kV) where available and loads >10MW are usually on the HV distribution system (11kV - 33kV). Some consideration should also be made for grouping the loads on a switchboard in terms of sub-facilities, areas or sub-systems (e.g. a switchboard for the compression train sub-system or the drying area).

Loads are classified according to their duty as either continuous, intermittent and standby loads:

Loads are typically classified as either normal, essential and critical:

1) Normal loads are those that run under normal operating conditions, e.g. main process loads, normal lighting and small power, ordinary office and workshop loads, etc
2) Essential loads are those necessary under emergency conditions, when the main power supply is disconnected and the system is being supported by an emergency generator, e.g. emergency lighting, key process loads that operate during emergency conditions, fire and safety systems, etc
3) Critical are those critical for the operation of safety systems and for facilitating or assisting evacuation from the plant, and would normally be supplied from a UPS or battery system, e.g. safety-critical shutdown systems, escape lighting, etc

The consumed load is the quantity of electrical power that the load is expected to consume. For each load, calculate the consumed active and reactive loading, derived as follows:

is the consumed active load (kW)

is the consumed reactive load (kVAr)

is the absorbed load (kW)

is the load efficiency (pu)

is the load power factor (pu)

Notice that the loads have been categorised into three columns depending on their load duty (continuous, intermittent or standby). This is done in order to make it visually easier to see the load duty and more importantly, to make it easier to sum the loads according to their duty (e.g. sum of all continuous loads), which is necessary to calculate the operating, peak and design loads.

Many organisations / clients have their own distinct method for calculating operating, peak and design loads, but a generic method is presented as follows:

The peak load is the expected maximum load during normal operation. Peak loading is typically infrequent and of short duration, occurring when standby loads are operated (e.g. for changeover of redundant machines, testing of safety equipment, etc). The peak load is calculated as the larger of either:

is the peak load (kW or kVAr)

is the design load (kW or kVAr)

The design load includes a margin for any errors in load estimation, load growth or the addition of unforeseen loads that may appear after the design phase. The load schedule is thus more conservative and robust to errors. On the other hand however, equipment is often over-sized as a result. Sometimes the design load is not calculated and the peak load is used for design purposes.

Consider a small facility with the following loads identified:

The following electrical load parameters were collected for the loads identified in Step 1:

Suppose we have two voltage levels, 6.6kV and 415V. The loads can be classified as follows:

Calculating the consumed loads for each of the loads in this example gives:

The operating, peak and design loads are calculated as follows:

In the past, the load schedule has typically been done manually by hand or with the help of an Excel spreadsheet. However, this type of calculation is extremely well-suited for database driven software packages (such as Smartplant Electrical), especially for very large projects. For smaller projects, it may be far easier to simply perform this calculation manually.

The electrical load schedule is the basis for the sizing of most major electrical equipment, from generators to switchgear to transformers. Using the load schedule, major equipment sizing can be started, as well as the power system studies. A preliminary load schedule will also indicate if there will be problems with available power supply / generation, and whether alternative power sources or even process designs will need to be investigated.