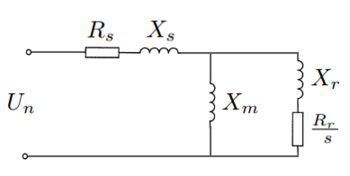 The single cage model has the following parameters:

The double cage model has the following parameters:

You will notice that in the models above, the shunt magnetising branch is represented as a magnetising reactance only (

). In a practical motor, there will also be eddy currents in the core laminations that manifest themselves as heat losses. These so called core (or iron) losses can be modelled as a shunt resistance as per the standard transformer model.

The reason for this is that the equivalent circuit model is a simplification of reality. For modelling purposes, we would like an equivalent circuit with constant parameters that is reasonably accurate (when compared to the performance data) over the full range of slip values. However, this simplified model doesn't take into consideration a number of factors present in practical motors, for example:

As mentioned above, we want an equivalent circuit with constant parameters that is reasonably accurate over the full range of slip values from 0 to 1pu. Sometimes such an equivalent circuit doesn’t actually exist, and in such cases we have to decide which parts to sacrifice (e.g. if only the starting characteristics are important in the study, then it may be acceptable for the full-load characteristics to be less accurate).

The equivalent circuit parameters of an induction motor can be estimated by various classes of parameter estimation methods, depending on what type of data sets are available and the applications of the model. The estimation methods generally fall into one of five classes [5]: