In power systems engineering, "inertia" is a concept that typically refers to rotational inertia or rotational kinetic energy. For synchronous systems that run at some nominal frequency (i.e. 50Hz or 60Hz), inertia is the energy that is stored in the rotating masses of equipment electro-mechanically coupled to the system, e.g. generator rotors, fly wheels, turbine shafts. 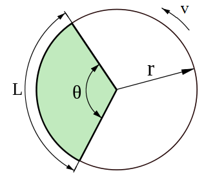 Figure 1. Cross-section of a cylindrical body rotating about the axis of its centre of mass

Below is a basic derivation of power system rotational inertia from first principles, starting from the basics of circle geometry and ending at the definition of moment of inertia (and it's relationship to kinetic energy).

The length of a circle arc is given by:

is the length of the arc (m)

is the angle of the arc (radians)

is the radius of the circle (m)

A cylindrical body rotating about the axis of its centre of mass therefore has a rotational velocity of:

is the rotational velocity (m/s)

Alternatively, rotational velocity can be expressed as:

is the angular velocity (rad/s)

is the speed in revolutions per minute (rpm)

is the rotational kinetic energy (Joules or kg.m2/s2 or MW.s, all of which are equivalent)

is the mass of the rotating body (kg)

Alternatively, rotational kinetic energy can be expressed as:

is called the moment of inertia (kg.m2).

Notes about the moment of inertia:

The moment of inertia can be expressed as a normalised quantity called the inertia constant H, calculated as the ratio of the rotational kinetic energy of the machine at nominal speed to its rated power (VA):

is the inertia constant (s)

is the nominal speed of the machine (revolutions per minute)

is the rated power of the machine (VA)

The moment of inertia for a generator is dependent on its mass and apparent radius, which in turn is largely driven by its prime mover type.

Based on actual generator data, the normalised inertia constants for different types and sizes of generators are summarised in the table below:

Relationship between Inertia and Frequency 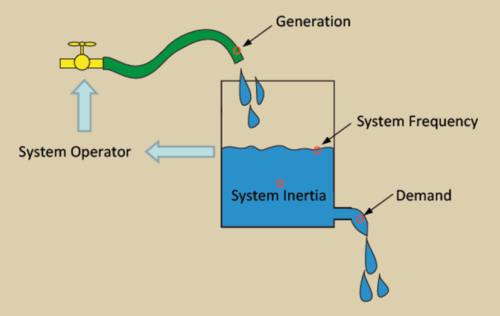 Inertia is the stored kinetic energy in the rotating masses coupled to the power system. Whenever there is a mismatch between generation and demand (either a deficit or excess of energy), the difference in energy is made up by the system inertia.

The figure to the right illustrates this concept by way of a tank of water where system demand is a flow of water coming out of the bottom of the tap and generation is a hose that tops up the water in the tank (here the system operator manages the tap, which determines how much water comes out of the hose). The system frequency is the water level and the inertia is the volume of water in the tank. This analogy is instructive because it can be easily visualised that if system inertia was very large, then the volume of water and the tank itself would also be very large. Therefore, a deficit of generation would cause the system frequency to fall, but at a slower rate than if the system inertia was small. Likewise, excess generation would fill up the tank and cause frequency to rise, but at a slower rate if inertia is very large. 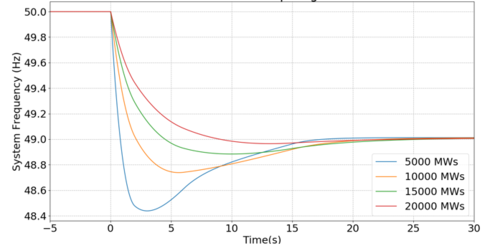 Figure 4. Frequency response after a generator trip at different levels of system inertia

Therefore, it can be said that system inertia is related to the rate at which frequency rises or falls in a system whenever there is a mismatch between generation and load. The standard industry term for this is the Rate of Change of Frequency (RoCoF).