The Newton-Raphson algorithm is the most commonly used iterative method to solve the power flow problem.

A nonlinear function that is differentiable can be approximated by a polynomial using a Taylor series. Let f(x) be a function of a single variable x. It is approximated about a point

using a Taylor series as follows:

The function f(x) is said to be linearly approximated when only the first two terms are retained and if we include the second derivatives, then it said to be a quadratic approximation. 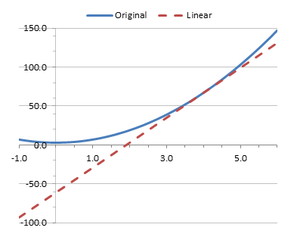 Figure 1. Comparison of the original and linear approximated function

and compare the result.

The function and its derivative at a given point are as follows:

The linear Taylor series approximation is:

In Figure 1, the original and linear approximation of the function is plotted. It can be seen that the approximation is good near

In the above example, we have learned how to approximate the non-linear equation and calculate the value of a function at a given point. Similarly, linear approximations of a Taylor series can be used for calculating the solution of the non-linear equation and determine the value of x at a given f(x). In Equation 1, if we neglect the second and higher differential order term then the equation can be written as:

, similarly, the solution x cannot be estimated correctly if the initial guess

, the function is again linearized around a point x and the solution is estimated again. This process is repeated until the difference between current estimation and previously estimated value is lower than a predefined tolerance. This method of iteration is called Newton-Raphson method and Equation 3 is commonly known as Newton-Raphson equation.

Example 2: Determine the value x at which f(x) = 103 using Newton-Raphson method. Use the same function defined in Example 1 with initial guess of

The function and its first derivative are as follows:

Starting from k = 0, we can estimate the solution x for k+1 until the error term

The values of the first 8 iterations are as follows:

It is noticeable that the solution has converged after iteration k = 5 to the value x = -5.00 and the difference between the solution of two iteration onward is lower than the tolerance. The solution can be verified by calculating the function value at x = -5.00.

Generally, non-linear equations have more than one solution but the Newton-Raphson method provides only one solution that is close to the starting point. In order to get the other solution, the initial value must be changed to different value.

In the same example, if we change the initial value to x0 = 1.00, the solution will converge in the same number of iteration but in opposite direction and provide second solution i.e. x = 5.0. The Newton-Raphson method converges quickly when the starting point is close to the solution. However, in some circumstances, the method is known to diverge or provide no information that the solution exists. In the example above, if f(x) = 0, then the Newton-Raphson method will not converge.

Traditionally, the Newton-Raphson equation is formulated to find the root of a function, i.e. solving for x when

. Hence the Newton-Raphson iteration in Equation (3) reduces to:

In the derivation above, the Newton-Raphson method is used to find the root of a single equation

. In order to simultaneously solve the roots for a set of n equations

, the Newton-Raphson iteration in Equation (4) can be extended to the following matrix form:

Application to the Power Flow Problem

When applied to the power flow problem, the Newton-Raphson algorithm is used to solve for a vector of bus voltage magnitudes and angles, i.e.

(1) The voltage and angle at the swing bus is specified (i.e. known a priori) and is therefore not part of the solution vector

.
(2) Bus voltage magnitudes at PV buses are specified and therefore not part of

. Only the bus voltage magnitudes of PQ buses are included.
(3)

includes all PQ and PV buses.

is the number of PQ buses

is the number of PV buses

Note that buses in the network must be ordered such that the PQ buses are first, followed by the PV buses.

The basic Newton-Raphson iteration is as follows:

By convention, the Jacobian matrix is set up as a partitioned matrix of the form:

Where each term is a sub-matrix of the form (using

In rectangular form, the terms in the sub-matrices are real numbers calculated by the following expressions:

The power flow problem is said to be ill-conditioned if the Jacobian matrix is ill-conditioned. This is because in the Newton-Raphson algorithm, each iteration has the following linear form:

is the power flow Jacobian matrix

is the bus voltage (magnitude and angle) correction vector

is the active and reactive power mismatch vector

Therefore, if the Jacobian matrix is ill-conditioned, the solution to the power flow iteration can become wildly unstable or divergent.

The most common characteristics that lead to ill-conditioned power flow problems are as follows:

Each iteration of the Newton-Raphson algorithm requires basic matrix operations to be performed, i.e. matrix arithmetic, multiplication and inversion. For large networks, the use of efficient numerical techniques can significantly improve computation times:

Suppose a network has on average 2 branches for every bus, then the storage requirements for such a network is

entries. If the network had 200 buses, then the storage requirements is

for the full matrix and

for the sparse matrix.

The Newton-Raphson algorithm has the tendency to converge (or diverge) to an incorrect solution within several iterations, depending on such factors as the level of ill-conditioning, quality of the initial estimates, etc. Some techniques for improving convergence are listed below:

Characteristics of the Newton-Raphson Algorithm

The Newton-Raphson algorithm is without doubt the most widely used method for solving power flows because of some key favourable characteristics: