). It is named after electrical engineer Edith Clarke [1]. 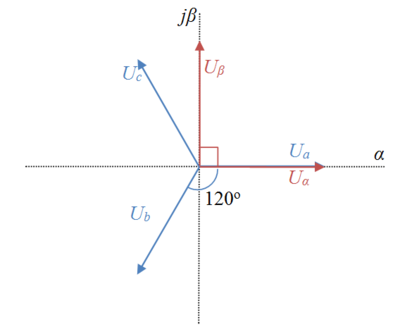 Consider the voltage phasors in the figure to the right. In the natural reference frame, the voltage distribution of the three stationary axes Ua, Ub, and Uc are 120o apart from each other. Cartesian axes are also portrayed, where

is the horizontal axis aligned with phase Ua, and the vertical axis rotated by 90o is indicated by

have the same magnitude in per unit.

by the following transformation matrix:

The inverse transformation can also be obtained to transform the quantities back from two-phase to three-phase:

Taking the Clarke transform, we get: 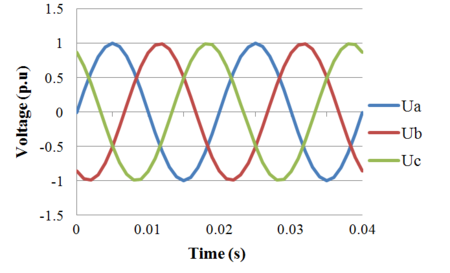 Three-phase voltages in the time domain 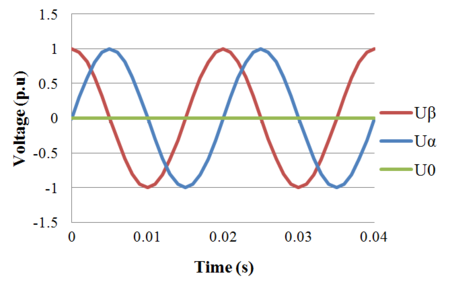 From the equations and figures above, it can be concluded that in the balanced condition,

are sinusoidal functions and

Similarly, one can calculate the Clarke transform of balanced three-phase currents (which lags the voltage by an arbitrary angle

Using the same procedure as before, the Clarke transform is:

We can see that as in the voltage case,

is a cosine function,

is a sine function and

is zero. However note the lagging phase angle

As three phase voltages can be represented in 2D complex plane like vectors, the transformation can be done by using same idea. If vector decomposition is used, it can be seen that:

To obtain zero component, every phase voltage can be summed with equal weights to reveal any imbalances between phases or DC component. Therefore;

If these are written in matrix form;

, is added as a correction factor to remove scaling errors that occured due to multiplication. These constants are selected as

above as standard values. However, there are also another possibilities to select these coefficients. Another approach can be reduction of gain in matrix to 1 [2].

Let us calculate the gain caused by the matrix coefficients for the first row;

The same result can be obtained for second row if the necesssary calculations are done. To reduce this gain to unity value, a coefficent should be added as;

can be calculated from by using;

Use of different approaches have different advantages and disadvantages. Advantage of this different selection of coefficients brings the power invariancy.

In first method power can be written as;

Here the multiplication of 2 transformation matrices can be found as following in the first approach;

which causes power to be:

However, in the second approach where the coefficients are reduced to unity;