The transform applied to time-domain voltages in the natural frame (i.e.

is an initial phase shift of the voltage.

The inverse transformation from the dq0 frame to the natural abc frame:

The remainder of this article provides some of the intuition behind why the dq0 transform is so useful in electrical engineering.

The dq0 transform is essentially an extension of the Clake transform, applying an angle transformation to convert from a stationary reference frame to a synchronously rotating frame. The synchronous reference frame can be aligned to rotate with the voltage (e.g. used in voltage source converters) or with the current (e.g. used in current source converters). 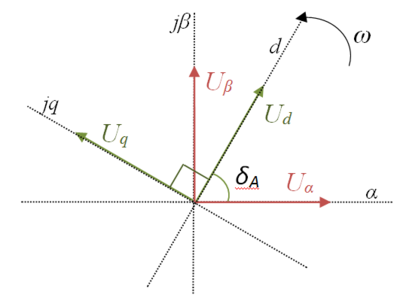 Historically however, the dq0 transform was introduced earlier than the Clarke transform by R. H. Park in his seminal 1929 paper on synchronous machine modelling [1].

The following equations take a two-phase quadrature voltage along the stationary frame and transforms it into a two-phase synchronous frame (with a reference frame aligned to the voltage):

Note that in the dq0 frame, the 0-component is the same as that in the

Consider a balanced three-phase voltage with

The dq0 transform of this voltage is:

Suppose that we are using a voltage reference frame and will align the synchronous frame with the voltage. Therefore

It can be observed that since the synchronous frame is aligned to rotate with the voltage, the d-component corresponds to the magnitude of the voltage and the q-component is zero. A plot of the transformation of a voltage from a stationary

frame into rotating dq frame is shown in the figure below. 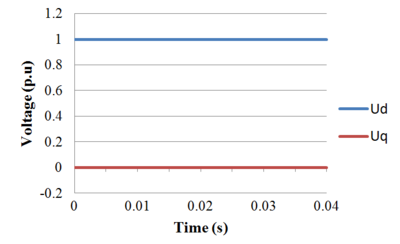 The inverse transform is as follows:

The dq0 transformation can be similarly applied to the current. From a two-phase quadrature stationary (

) current of the form (where

is the angle at which the current lags the voltage):

We transform it into a two-phase synchronous (dq0) frame: 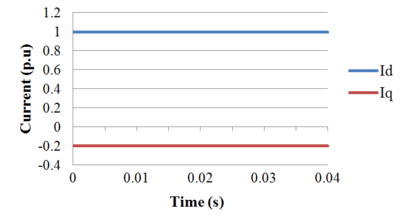 The instantaneous active and reactive power from a set of two-phase (dq) voltages and currents are:

When the synchronous frame is aligned to voltage, we saw earlier that the quadrature component :

. Therefore, the power equations reduce to:

For three-phase balanced systems, the dq0 transform has the following advantageous characteristics:

). For balanced systems, the 0-component is zero. The DC quantities facilitate easier filtering and control.

2) Active and reactive power can be controlled independently by controlling the dq components.