Consider the overhead line represented as a two-port network of the form: 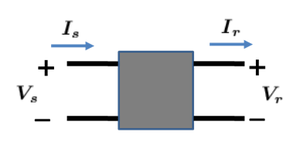 is the voltage at the sending end

is the voltage at the receiving end

is the current at the sending end

is the current at the receiving end

Where that the parameters

are constants (which can be either real or complex). These constants are called the ABCD parameters of the line. Sometimes, they are referred to as Generalised Line Constants.

In matrix form, the ABCD parameters are represented as follows:

In its simplest form, we neglect the line resistance and capacitance and represent the line as purely inductive, i.e. the line impedance

Therefore the ABCD parameters of the lossless (L) line in matrix form are:

The lossless (L) line model can be made more realistic by adding a resistive component, i.e.

Using the same logic as the lossless (L) line above, the sending end quantities can be calculated as:

Therefore the ABCD parameters of the RL line in matrix form are:

We've so far neglected capacitances in our line, but at higher voltages and longer line lengths, the effect of shunt capacitances becomes more significant. So we now consider a lossless LC line of the form: 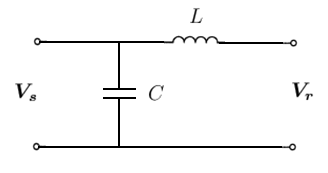 The inductance and capacitance can be represented as a reactance and susceptance as follows:

Therefore the ABCD parameters of the LC line in matrix form are:

" model is an extension of the lossless LC line where a series resistance is added and the shunt capacitances are balanced (i.e. half at each end of the line).

The series elements can be represented as an impedance and the shunt capacitances as susceptances as follows:

Before we analyse the circuit, it is worth noting from Kirchhoff's current law that the current across the series impedance

Therefore the ABCD parameters of the nominal

line in matrix form are:

Refer to the distributed parameter model article for the detailed derivation of the model.

along the line (relative to the receiving end bus) are given by the following equations:

Note that the equations above are derived here.

By inspection, the ABCD parameters of the above equations can be represented in matrix form (for a line of length

need to be adjusted such that:

is the length of the line (m)

The adjusted line parameters can be calculated from the nominal

Alternatively, the adjusted line parameters can also be represented as follows:

Click here for the full derivation of the calculation of the adjusted line parameters, including the alternative representation.